The use of oak in the winery offers many options from winemakers.  With today’s availability of various oak products (i.e., chips, staves, powders), winemakers have more choices than ever before to integrate a wood component into their product.  However, the use of oak barrels remains an intrinsic part of most winery operations.  During the aging process, oak barrels have the potential to:

Additionally, the barrel room is often romantically viewed upon by consumers, and it is not uncommon for visitors to find barrel show cases in many tasting rooms, private tasting rooms, or while on a guided winery tour. 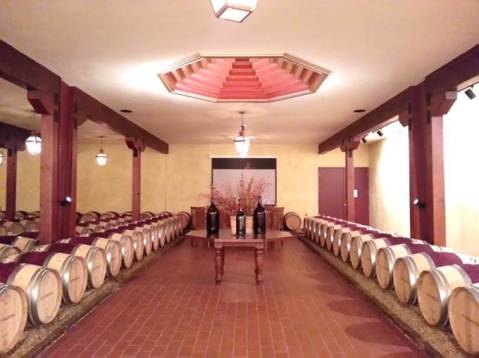 The barrel room at Barboursville Vineyards (VA) gorgeously catches the eyes of their visitors. Photo by: Denise M. Gardner

Nonetheless, barrels also offer challenges to wineries.  One of the most inherent challenges associated with a barrel program is maintaining a sanitation program.

The growth of spoilage yeast, Brettanomyces, is often discussed amongst wineries that utilize barrel aging programs.  However, additional spoilage yeast species such as Candida and Pichia have also been associated as potential contaminants in the interior of wine barrels (Guzzon et al. 2011).  Brettanomyces, commonly abbreviated as Brett, was first isolated from the vineyard in 2006 (Renouf and Lonvaud-Funel 2007) and until that point had most commonly been associated with the use of oak in the winery.  The growth of Brett in wine has the potential to impart several aromas as a result of volatile phenol [especially 4-ethylphenol (4-EP) and 4-ethylguaiacol (4EG)] formation in the wine.  Descriptors used to describe a Bretty wine include: barnyard, horse, leather, tobacco, tar, medicinal, Band-Aid, wet dog, and smoky, amongst others.  It should be noted that the presence of these aromas does not necessarily confirm that Brett is in the wine; there are other microflora, situations (e.g., smoke taint) or oak chars that can impart some of these aromas, as well.

When barrels are filled with wine, it’s important to monitor the wine regularly for off-flavors while it is aging.  Wines should be regularly topped up with fresh wine to avoid surface yeast or acetic acid bacteria growth that can contribute to the volatile acidity (VA).  We usually recommend topping barrels up every-other-month.  Keep in mind that free sulfur dioxide concentrations can drop quicker in a barrel compared to a tank or wine bottle (MoreFlavor 2012) and free sulfur dioxide contractions should be checked (in conjunction with the wine’s pH) and altered as necessary to avoid spoilage.  Finally, when using a wine thief, both the internal and external part of the thief need cleaned and sanitized in between its use for each and every barrel to avoid cross contamination.  Dunking and filling the thief in a small bucket filled with cold acidulated water and potassium metabisulfite (acidulated sulfur dioxide solution) is a helpful quick-rinse sanitizer.

Barrels offer a perfect environment for microflora to flourish.  Wine barrels are produced from a natural substance (wood), which has its own inherent microflora from the point of production; obviously, barrels are not a sterile environment when purchased.  However, the structure of wood is rigid and porous, which provides nooks and crevices for yeast and bacteria to harbor within.  The porosity of the wood also makes it difficult to clean and sanitize, especially when compared to cleaning and sanitation recommendations associated with other equipment like stainless steel tanks.  Guzzon et al. (2011) found that barrels used over 3 years in production had a 1-log higher yeast concentration rate retained in the barrel compared to new and unused oak barrels.  This demonstrates the ideal environment within the barrel for retaining microflora over time, even when adequate cleaning and sanitation procedures are utilized in the cellar.

Common barrel sanitizers include ozone (both gas and aqueous), steam, hot water, acidulated sulfur dioxide, and peroxyacetic acid (PAA).  A study conducted by Cornell University on wine barrels used in California wineries found the use of sulfur discs, PAA at a 200 mg/L concentration, steam (5 and 10 minute treatments) to be effective sanitation treatments for wine barrels (Lourdes Alejandra Aguilar Solis et al. 2013).  In this same study (Lourdes Alejandra Aguilar Solis et al. 2013) ozone (1 mg/L at a 5 and 10 minute treatment) was also evaluated and found effective in most barrels tested, but a few barrels that did not show adequate reduction with the ozone treatment.  While the research conducted by Cornell indicated the potential lack of cleaning the barrel thoroughly before the ozone sanitation treatment, Guzzon et al. (2011) cited ozone’s efficacy is most likely caused by its concentration.  Both are important considerations for wineries.

Barrels should always be effectively cleaned of any debris and or tartrate build up before applying a sanitation agent.  This is essential to allow for maximum efficacy during the sanitation step.  High pressure washers, a barrel cleaning nozzle, and the use of steam are some options available to wineries in terms of physically cleaning the interior of barrel.  Additionally, some wineries use sodium carbonate (soda ash) to clean some of the debris (Knox Barrels 2016, MoreFlavor 2012) in addition to the use of a high pressure wash.  Always remember to neutralize the sodium carbonate with an acidulate sulfur dioxide rinse prior to filling with wine.

Dr. Molly Kelly from Virginia Tech University has previously recommended a 3-cycle repeat of a high-pressure cold water rinse, followed by high pressure steam before re-filling a used barrel and assuming the wine that came out of that barrel was not contaminated with spoilage off-flavors (Kelly 2013).  If the barrel is hot by the end of this cycle, it may be advantageous to rinse with a cold, acidulated sulfur dioxide solution before filling the barrel with new wine.  If there isn’t wine available to refill the barrel, it can be stored wet with an acidulated sulfur dioxide solution or using sulfur discs (Kelly 2013).

It is not usually recommended to store used barrels dry for long periods of time, and wineries can use an acidulated sulfur dioxide solution (top off as if it had wine in it) for long-term storage.  However, wineries that store their barrels dry need to rehydrate the barrels prior to filling with wine.  Check the cooperage for leaks, air bubbles, and a good vacuum seal on the bung.  Steam or clean water (hot or cold, overnight) are adequate rehydrating agents (Pambianchi 2002).  Barrels that leak wine offer harboring sites for potential yeast, bacteria, and mold growth, which can all act as contaminants to the wine itself.

It should be noted that contaminated barrels (barrels that produce a wine with off-flavors) may need extra cleaning and sanitation steps to avoid future contamination when the barrel is refilled.  It is typically recommended to discard barrels that have a recorded Brett contamination.  If the barrel has picked up any other off-flavors, especially during storage, it should probably be discarded from future wine fillings.

Barrels undoubtedly offer several challenges for wineries, including proper maintenance, cleaning and sanitation.  Nonetheless, engaging in good standard operating procedures for maintaining the barrel’s cleanliness can help enhance the longevity of the barrel and minimize risk of spoilage for several wine vintages.

Renouf, V. and A. Lonvaud-Funnel. 2007. Development of an enrichment medium to detect Dekkera/Brettanomyces bruxellensis, a spoilage wine yeast, on the surface of grape berries. Microbiol. Res. 162(2): 154-167.

We're not around right now. But you can send us an email and we'll get back to you, asap.